these texts are an archive of my life in the San Francisco Bay Area from march 2007 - march 2015. it stands as a record of close to a decade of my life, charting the struggles i faced as an artist, daughter, and lover. messy and chaotic at times, eloquent and poetic at others, these texts are an index i am proud of. it was here in this electric box that i learned how to be honest about my experiences and the person i needed to become. it was here that i first learned the truism that words make the world and how to trust such a beautiful, rife, hard fact.
thank you for meeting me here in such tall grass. 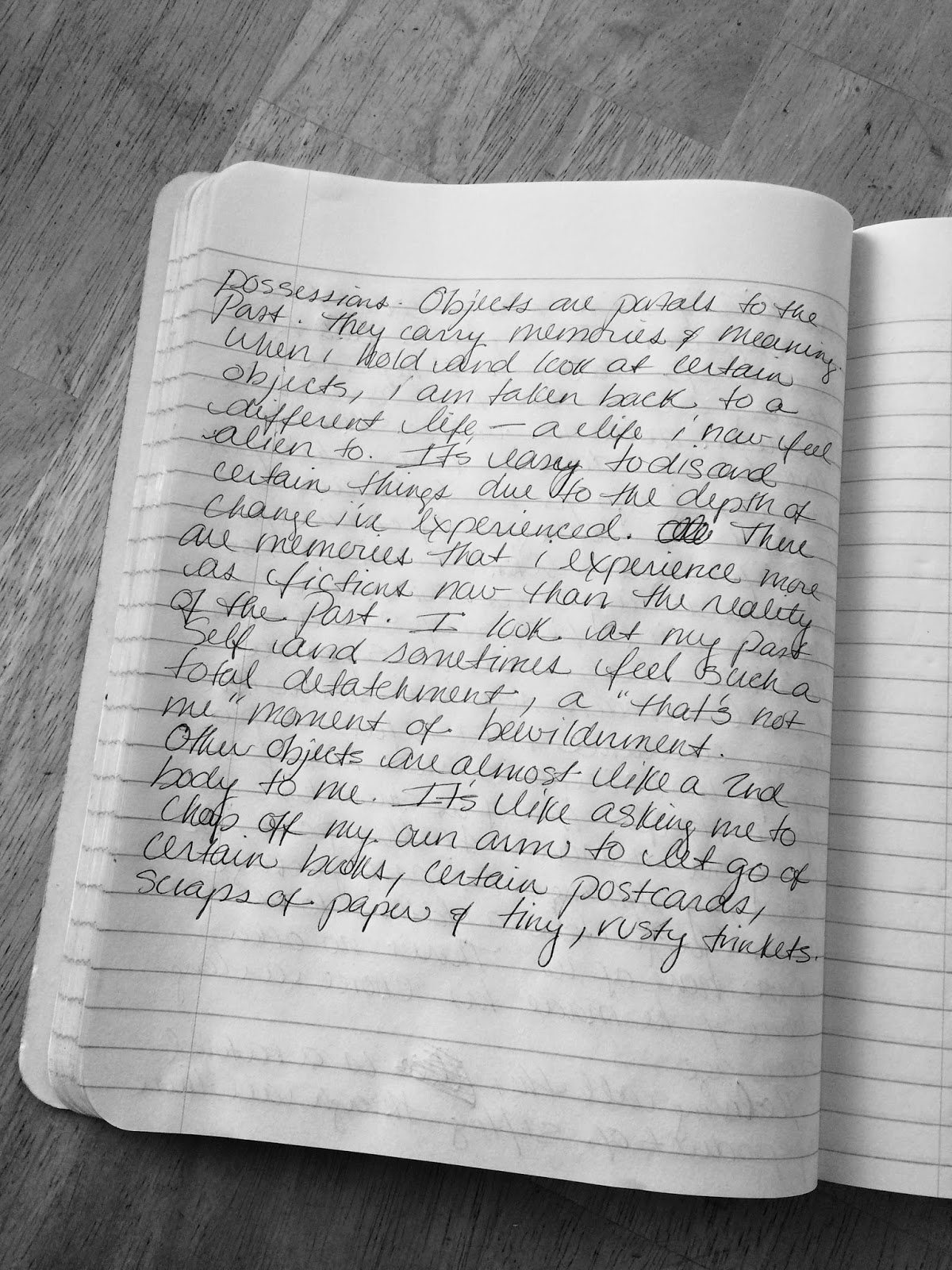 it is a strange territory, this place of transition.  a part of me wonders (has been wondering) if it's time to let go of the blog, to let it be an archive of a particular era and move on.  i don't lean on it as much as i once did.  i guess i don't need to.  i am an entirely different person than who i was when i started this blog 8 years ago.  it's hard to believe it's been that long.  it's hard to believe the amount of change my life has undergone in that time.  i look back and feel an almost total lack of connection to who i was when i published my first blog post.  this has become a strange sort of time-capsule.  i never really go back and read it.  maybe one day i will.  just like the diaries.  i very rarely go back through them.  the passed few years have been so much about living and not at all about reminiscing.  i don't want to page back over my life right now.  i'm interested in the view that is opening in front of me.  i am interested in my Future.  i've spent enough time dealing with the Past.

but it's complicated and i can be so inconsistent when it comes to certain things.  i spent an hour reading a diary i kept when i was 23.  it was amazing to read.  i loved flipping through the pages and seeing my handwriting, almost identical to what it looks like now, and reading my complaints and passions, also almost identical to what they are now.  it's funny what remains the same despite growing up, despite leading an entirely different life.  the diary volume felt like such a treasure and i feel lucky to still have it in my possession.  such a window.  such a view.  i know i'll feel the same way about the diaries of the passed few years too.  i'll feel that way about the young days of the blog.  i just don't know what this place is anymore other than a place to cry out in the dark.  it isn't part of the community it once was.  and that's okay.  in some ways i prefer the silence that exists here now.  i never fear my comment box.  i never feel any pressure to blog.  i never feel any eyes on me at all. every time i write here, it's a sudden impulse and not at all governed by rules or expectations.  when i made rules for myself to blog everyday, i was probably a better writer in many regards but i also posted a lot of meaningless shit too.  it's better this way - only posting when i have something i actually want to say - but i silence myself so often.  i don't write here as much as i want.  i'm not sure why i stop myself and the only answer i've come up with is that perhaps i've moved in to a different era of living.  perhaps i don't need to do this anymore?  or at least for awhile.  i'm not sure.  perhaps i need to make myself do it everyday again and wake the impulse i once felt to pound the keys back up.  it's so easy to hide away in my private diary.  it's so easy to close the cover and let my life stay there, stay put, remain safe.  untouched and unknown.

i've been feeling a strange nostalgia lately from going through all my possessions and getting rid of things.  i put all my nail polish on the kitchen table for my roommates' girlfriends to take.  i pulled all my photographs out of the photo albums which housed them and left the albums on the street corner, too bulky to consider transporting on my month-long adventure across the US to new york.  i put my mother's possessions in a box to send to my sister.  i made a stack of books to send to Jose: Jean Genet and Kathy Acker, a Keith Haring coloring book.  i send texts to friends asking them to come over and pick out what they want.  i sold a third of my book collection the other day and got $200.  i sold a third of my wardrobe and got $100.  i sift through the objects i've lived with for so long and either feel an absolute connection and affinity with them... or nothing at all.  the closer i get to the day we leave, the more i want to just be done with this task and leave everything on the street.  that might just be what ends up happening.  the last time i did this i even left art on the street.  nothing good, nothing i was sad to be without, but even art was left behind to find its own way in the world.  the urge to begin again, to be unfettered.  the instinct to grasp at freedom.

i've written these types of sentences before.  i've expressed these same sentiments and made similar statements.  i guess it hasn't really been all that long since the last time i moved but i've never made such a big leap. moving across the country is a pretty major thing and it absolutely feels like a new chapter is opening.   a deep sense of calm has found me despite the stress of needing to wrangle the possessions and memories which remain.  i fight the urge to simply let it all scatter in the wind.  some things must be saved.  the diaries especially.  everything else could burn but the diaries need to be kept safe.  maybe that's the biggest perk of keeping a blog- it can't be destroyed.  even if these words are never read, they remain.  my mother burned everything she ever wrote.  there are no poems and no diary entries.  she burned them.  she burned everything she wrote within a few days of scrawling them. she was that paranoid of feeling ashamed of herself.  she was that sensitive.  she was that afraid of her thoughts and words being used against her, of someone else twisting her emotions or statements.  i don't want to be like that.  for however obscure my life is i don't want to obliterate it.  i don't want to erase myself.  this desire to burn it all down, i don't want to share in it.